You are here: Home / Foodie Heaven / To Ensure Successful Churning, Use the Hand of a Dead Man

We don’t use any pretend butter stuffs… butter is a shortcut to flavor.” -Rory O’Connell, Ballymaloe Cookery School Demonstration, 8 April 2015 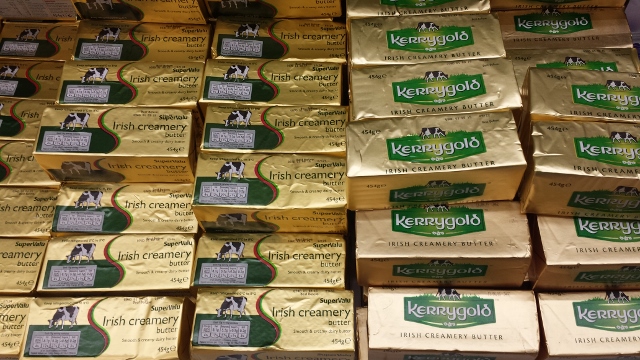 18,500 dairy farms can be found in the Republic of Ireland according to the Irish Times. All that dairy means a whole lot of butter. Golden, creamy, silky butter. Just walking through a local supermarket or farmer’s market you are faced with a plethora of choices. If you are curious about the history of butter in Ireland then the Cork Butter Museum is a good place to start.

Located in the original Cork Butter Exchange Building, the museum illustrates the history and culture of dairy and the impact of butter on Irish society. Spread out on two floors, the first floor contains a variety of artifacts from butter production and the second floor looks at the cultural significance of butter on early Irish people as well as trade routes and documents of butter sale through the history of the exchange.

The museum visit begins with viewing a video that discusses the early days of Irish dairy production and how marketing and quality control turned butter into “gold” for farmers. The film illustrates what measures early farmers would go through to sell their firkins (small wooden barrels) of butter from their 10-20 cows and how the process improved over the years allowing for farm growth to the current average family farm of 60 to 80. Logo and identifying designs can be compared by examining the wide variety of butter stamps and wrappers on display. The museum has a variety of churns from glass tabletop size to large barrel churns that could hold up to 20 gallons of cream.

An informative placard on the wall discusses that farmers a century or more ago did not understand the science behind butter making and as a result there were many superstitions. Due to the high value of butter its production was carefully crafted. Precautions were taken by the farmer and his family to ensure a proper churning. The cow house contained St. Brigid’s crosses and were located far from ring forts which were believed to be homes to fairies. Cows were sprinkled with holy water and received the protective qualities of the color red through a red ribbon tied around their tail following milking. During the churning process a combination of pagan and christian prayer was recited. Two types of wood were used in the churn to protect against witchcraft and milk vessels and churns were forbidden to be loaned. Fairies were greatly feared and depending on the region salt was sprinkled on the churn or red-hot iron placed under the churn to keep them away. To ensure success, some county customs were to use the hands of the dead. An infant’s hand may be placed under the churn, or my personal favorite was to

Use the hand of a dead man (preferably one who had bee executed) to stir the milk in the churn.”

Butter, and cows have a long and important history on Irish culture. Early Celtic people were semi-nomadic dairy cow herders, or búachaill. Wealth was judged by the number of cattle you had and they were the measurement for financials as there were no coins until the arrival of the Vikings. Cattle raids were apparantly all the rage and were carried out on a regular basis. Successful raids led to honor and celebration. Celtic kings were given tribute through cattle and were often expected to lead their loyal farmers in the raids. With the development of monasteries across Ireland raids continued and now the church received a portion of the acquired cattle.

There is also a ‘Bog Butter’ artifact. A container crafted from a single tree trunk dated to over one thousand years old, it still contains the original butter that was packed inside. The properties of the bog in which it was found have preserved the butter. The butter on the outside has hardened over time and the exhibit card explains that the inside center remains soft. The process used to create butter in essence has not changed from then until now. Cream is separated from the milk, then the cream is beaten and small lumps of butter form along with milk residue.

The Cork Butter Museum is a fascinating look at butter. The visit takes approximately an hour and is heavy on reading so if you need reading specs, bring them! More information can be found at corkbutter.museum.