You are here: Home / Daily Ramblings / Motorcycle travel? The idea was nuts to me.

If you would have told me a year ago this journey for art would involve motorcycle travel I would have said you were crazy. The secret is out; before this trip, I had only been on Daryl’s BMW GS at home maybe a dozen times. The longest was a whopping hour at most, and on the highway only twice and I was a nervous wreck. Daryl had always wanted to do a trip like this but it seemed really impossible to me. We had never even rented a car in another country except the one time we ended up with a pickup truck in Mexico…

Fast forward or rather rewind to a friend’s 2014 holiday party. We started talking to a man named Chico that rode in various countries around the globe and the conversation reminded my husband of how awesome it would be to see Europe by moto. So the idea was re-energized  and the rabbit hole of the internet grabbed hold. He quickly learned it didn’t make sense to ship his existing bike over nor to rent one for as long as we were planning on traveling. The economical option was to buy a second motorcycle already in Europe.

Motorcycle travel is huge around the world, especially in Europe.

There are enthusiasts all over the world that store motorcycles for a small fee and will put people that want to purchase one in contact with people that want to sell one. Daryl researched and settled on Motofeirme in Cork, Ireland. Flying in and out of Ireland from New York is quick (6 1/2 hrs or so) and is dramatically less expensive than other European cities. Plus, throw in no language barrier for the transaction making it an easy start to the process. A process that is 99.9% build on trust.

The entire transaction goes against what you learn as a New Yorker.

No, the world is not out to get you, and yes, you can trust people. After studying some photos, having a bunch of calls with the gentleman Martin that stores the bike in Cork and the gentleman living in Florida that was selling the bike we decided this was the one, the BMW GS that we would put our faith in for five months. Money exchanged through bank transfer, titled through the good old mail system, and we crossed our fingers and focused only on positive thoughts from the day we transferred the money in January until we arrived in Cork on Good Friday. 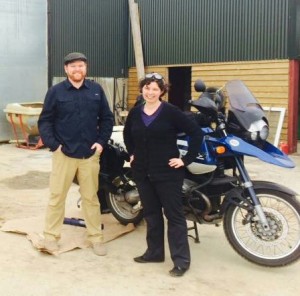 Picking up our BMW GS from Motofeirme in Cork, Ireland

Daryl selected this particular motorcycle (2003 BMW R1150 GS) knowing it is very reliable and that he could work on it on the side of the road if he needed to. After all, it is one of the few motorcycles that come with a tool kit.

The journey is not over yet, but so far our blue alpine goat as we lovingly call her has only had a few hiccups. They’ve all been Daryl-fixable. Hiccups like a battery that decided not to start when we stopped at a rest stop after we drove for 2 hours in pouring rain and hail to Ravenna (which caused us to ride around with jumper cables for a few weeks). Or the fuel quick connect that busted on a Saturday night, around midnight, in Dubrovnik, a place where everything is closed on Sunday. Plus of course we had a ferry back to Italy to catch – luckily the owner of the apartment we were in had a friend with miscellaneous plumbing parts that he and Daryl were able to use to fix it. And then, a replacement battery which we replaced ourselves in the BMW Motorrad Parma Italy parking lot.

As we wind down and make our way back to Ireland we are hopeful for continued smooth sailing. Motorcycle travel has been amazing. After a good washing, she will be ready to go up for sale. It will be time for her to become someone else’s journey. But for now, we still get to enjoy the ride. 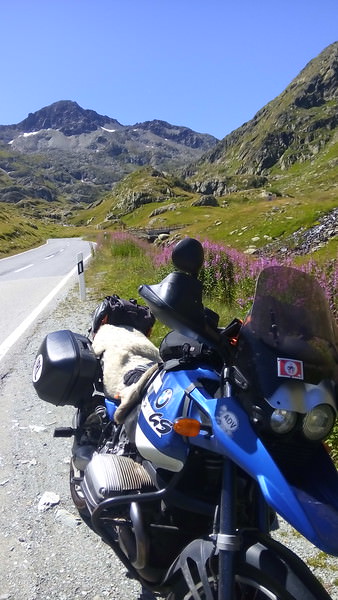 BMW GS on the Great Saint Bernard Pass in Switzerland