You are here: Home / Daily Ramblings / Motorcycle on the Italy to Croatia Ferry 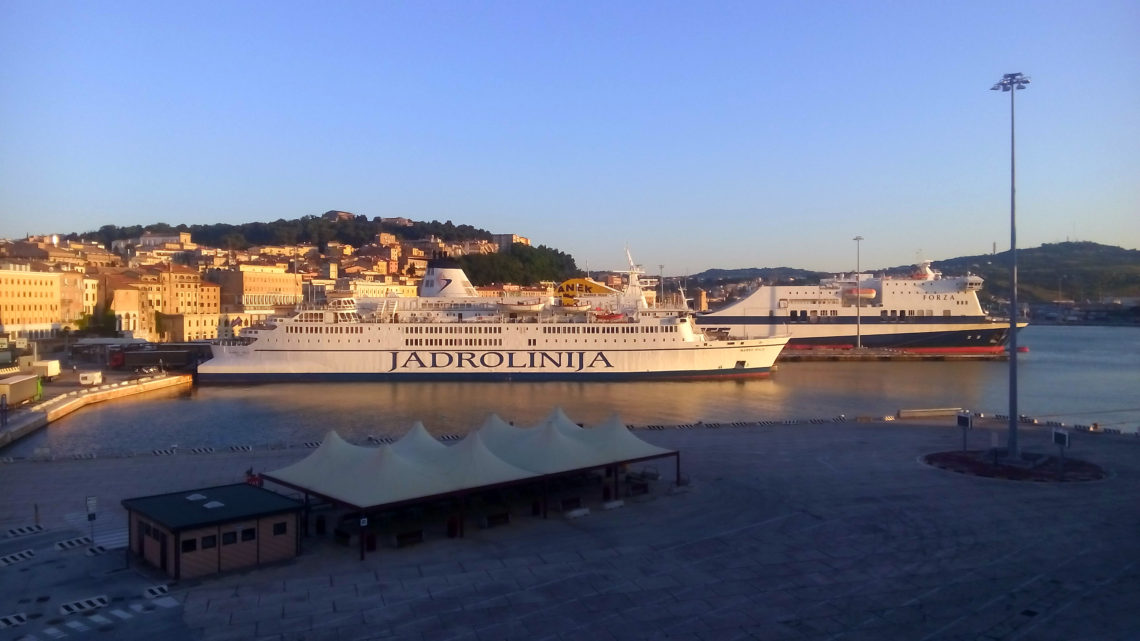 Ferry at the terminal in Split, Croatia

Motorcycles are a way of life in Italy. Everyone has one.

Or they have a scooter. Everbody’s immediate relatives certainly have a few. I read somewhere online–so it must be true–that Italy represents half of all registered two-wheelers in Europe. We are not talking Harleys, though we did see a few. We’re talking about Ducatis, Kawasakis, Yamahas, and of course, my favorite, BMWs. It was no surprise that there seemed to be the entire population of a small hilltop Tuscan village at the port getting ready to start a vacation with their motorcycle on the ferry from Italy to Croatia.

The level of fear I had about taking the ferry from Ancona, Italy, to Split, Croatia was ridiculous. Looking back now so many things that I genuinely feared on this journey were crazy. Travel on mass transit, as in the movement from A to B, has always given me anxiety. I am a control freak. So, I do what I can to control whatever I can. I look at lots of pictures online of the transportation we will be using. I read lots of forum and blog posts about other people’s experiences. And I usually arrive for departure stupid early.

Since I convinced myself from reading horror stories that if we were not crazy early, they would have no room for the motorcycle, even though we had a reservation, I made sure we would be first in line to board.

We were in Italy, so everyone was first to board, whether they arrived early, or right at boarding time.

You see my friends, Italians have a fantastic way of keeping organized chaos when it comes to queuing up for anything, especially transportation. Sometimes I think it’s the culturally accepted lack of personal space. Though, it probably stems from machismo. To my knowledge, I have no German genes, but I am a type A personality.

Give me punctuality and organized lines.

I expect people to listen when the gate agents say stay in your seats and not to get up until they call your boarding zone.

This is just not how the Italians are. Well, except for some peeps from Northern Italy. Their geographic location enabled German punctuality to wharf over and be absorbed.

We arrived at the Ancona ferry port and checked in at the general ticket office for Blue Line Ferries. When we booked, we had two choices, Blue Line or Jadrolinja. We choose merely by which boat had the best price. They issued us our boarding passes, checked our vehicle documents, told us which terminal our ferry was departing from and what time we could go to the port. They told us in Italian, and we understood them!

You got this Jes, you are conquering the Italian language, I thought to myself. 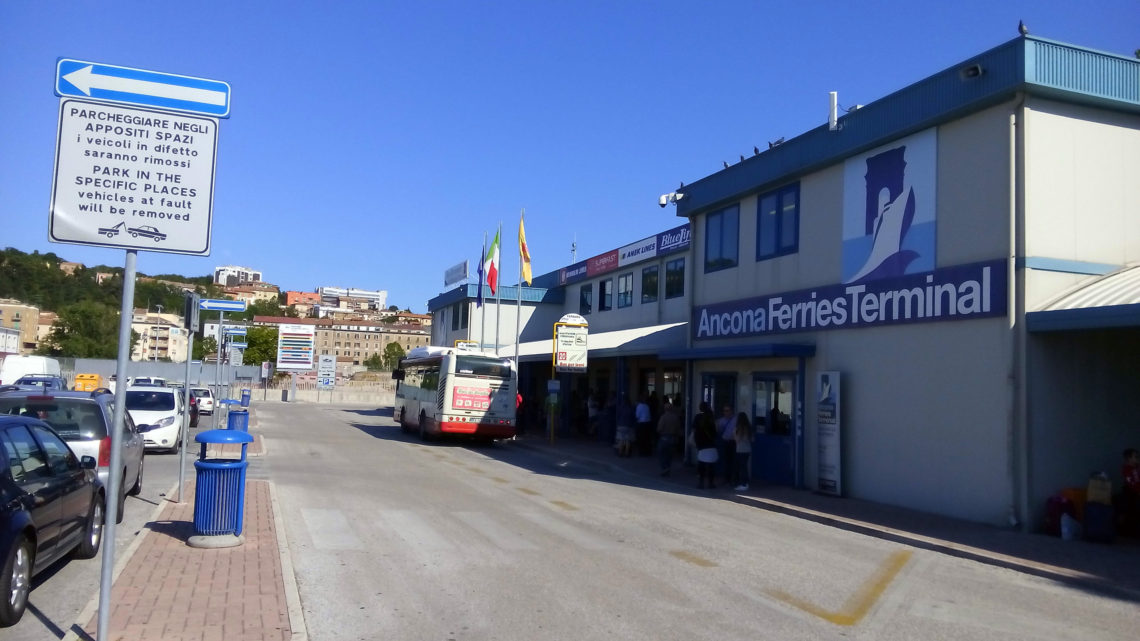 Ferry offices and check-in at the Ancona, Italy Ferry Terminal

There were motorcycles everywhere. We used our Italian language skills, and we did our best to converse with the riders. I quickly realized I was not conquering anything! We were only three weeks into class. I thought I knew what I was saying, but in reality, I was butchering the beautiful language. But you know what? It didn’t matter. They made do with bad English; we made do with nearly non-existent Italian.

The other riders told us what to expect on the boat, how to deal with the bike, what to leave behind and what to take with us to our cabin. We talked gloves, pants, and helmets, and about our sheepskin from Glengarriff, Ireland. Our blue alpine mountain goat (aka a BMW GS) was a looker, and everyone, everywhere on our journey stopped to talk to us about it. 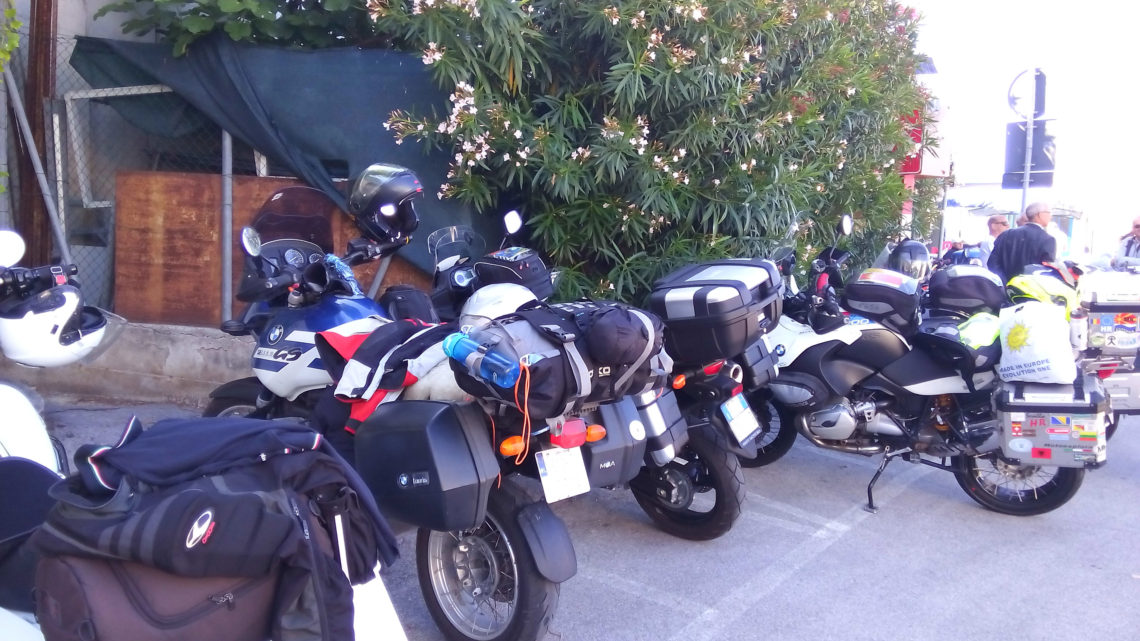 Once the conversation started, all we had to say was two things, and we were members of the cool club. It was like we were instantly invited to sit at the popular kid’s table at lunch in the cafeteria. The two things we had to say to get in were that we were 1. from NY (Ooos and Ahhhhs commenced) and 2. studying Italian in Umbria (bravas and fantasticos commenced). And then, all of a sudden a seriousness kicked in. Helmets went on, and motos took off. They dropped us. Like the kid with the bugger hanging from his nose.

We realized it wasn’t us. It was the machismo.

The drive to the port took us through the outskirts of the city along the water and over train tracks past the station. There was a mass of cars and motorcycles all over, wherever they could squeeze in, at every angle. A few traffic people in neon safety vests tried their best to yell commands–you this lane–you that lane. Horns blared, people shouted, arms flew about cutting through the air with directed precision.

This moment was the start of their vacations. As a result, they were in a rush to get on board to wait to depart. And as I mentioned earlier, it was organized chaos.

But on a motorcycle, things are a little different.

See, cars part way for motorcycles in Italy. Wherever you are (except crazy-ass Naples which is a whole different tale), they naturally move to the right or left when they see you in their rear-view mirror. The man in the car with the kids in the back seat starting his family vacation has been in your boots–riding on a hot summer day on a fully geared up stuffed pig. And someone moved over for him to pass.

All the bikes clustered together at the front. Yes, the asphalt has painted lanes, but these are suggestions. Italy is not Germany (Ok, Germany is one place that I have not been yet, it’s on my list though, so I’m not speaking from any personal experience, just hearsay). Some toughly looking Italians directed the bikes onto the boat and indicated where they wanted each rider to go–right side, left side, next level up, etc. Only half pay attention. The rest do what they want and load up when they feel like it, and park where they want.

When we took the ferry from Ireland to France, we were one of only three motorcycles on board. And English was spoken. Easy peasy. Each bike rider received chock blocks, and we were instructed to park in between the built-in clips on the floor. A guy then came over and strapped the bike to the floor clips. He was kind, made sure we had what we needed, made sure he gently but securely fastened our GS in place.

Again, we come back to the fact that this is Italy.

Italians were talking; we will say, loudly, and throwing hand gestures because we were not quick enough to get our stuff off and get ourselves situated.

My thoughts at this moment: WHAT THE FUCK IS GOING ON!

I was starting to have a panic attack with full on sweats and a head swirly-I’m-going-down sensation. I tried to ground myself–fixate my gaze on something. I know, gross, but lick my salty, sweaty hand for taste and smell my sweaty shirt — anything to bring me to that moment, right then, and to try to stop panicking.

Daryl could see my face and calmly said take the bags and wait by the door. He knew by the look in my eyes. From 13 years of marriage, he can always recognize that when I quietly start to acknowledge my surroundings, my anxiety is through the roof. The workers strapped the bikes. Basically from one to the next and back rapidly. And I guess eventually to the clips on the floor? Well, there were over 100 motorcycles on board, probably close to 200, all parked in neat and organized rows. It amazed me to look over and see the rows after all the craziness. Looking back, I was ridiculous to think these gentlemen did not know what they were doing. 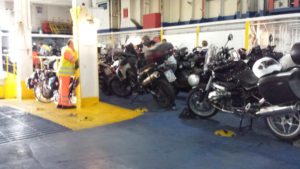 Motorcycles parked in an organized fashion on the ferry.

We headed up to the registration desk and got our cabin key. The rest of the trip was mostly uneventful except for the funny sign in the cabin bathroom. And the floor full of Italians with all their cabin doors opened singing pop songs or folk songs in unison throughout the night. 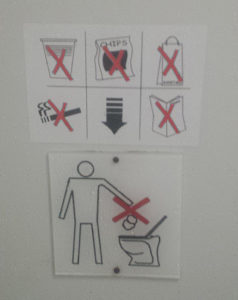 A sign reminding you not to flush chips–or your times–yes, it says times, my photo stinks, down the toilet.

Then like arrival, the hour leading up to departure was much of the same chaos.

Everyone started emptying into the general areas near the stairs, escalator, and elevator. Staff had to stand guard so people would not sneak down. Announcements were made over and over again in Italian, Croatian, and English not to go down until directed. Once directed, only motorcyclists could go down. That’s right; motorcyclists go first.

Down we went, then we loaded up. All bikes tried to exit at once because everyone had to be first. Passengers walked down and off the boat–their riders didn’t have time to wait for them to get their shit together and get on the bike. It would prohibit them from being first. Barely on, the riders would back up in a quick fit, and rush down the ramp.  A woman with a stroller probably made it past one of the elevator people and got down to the vehicle level before non-motorcyclists were allowed. Seems like she had a death wish because no one gave two shits that she had a stroller and was trying to get to her car. It was like their engines were yelling at her “Lady, it’s not your turn yet!”

The funniest part about everyone having to exit first? Everyone grouped once exited and allowed each other to get in front of the passport check line. Nobody wanted to be first for that part. 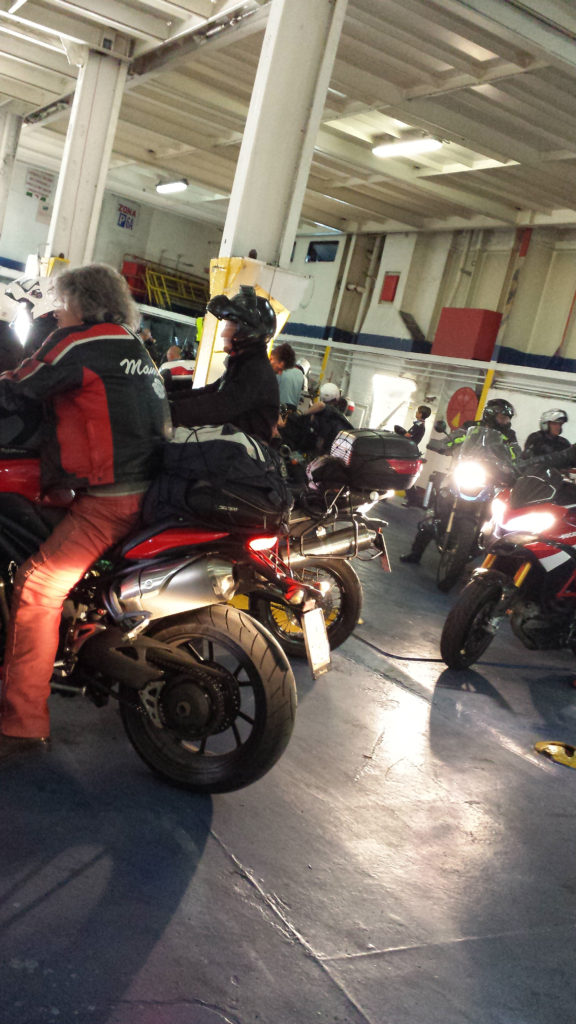 Everyone has to be off first.