You are here: Home / Europe / Croatia / Frescoes in Croatia: Learning the Art of Fresco

Frescoes are created by applying pigment to a damp wall surface of plaster (usually made by limestone or marble dust and water). They have been used during the centuries for purely decorative to the illustration of political or religious doctrine. The frescoes we viewed in Istria were created during Medieval times in small Gothic churches as a means to explain the stories of Christianity to illiterate parishioners.

When we checked into our accommodation in Bertoši located near the center of Istria in Croatia, our host asked us about our interests. To see as many frescoes as possible was my reply, of course. She made that happen, and she also connected me with local fresco artist and art professor Hari Vidović.

We arrived in Roč (Rozzo) on a sweltering afternoon and were instructed to meet Hari at the entrance gate. When we got to the town it was quiet and all shutters were drawn closed to keep out the heat. The air was stifling. We waited a minute or two and then around the corner came a gentleman in a puffy green Medieval top, tights, and painter’s cap. It was truly awesome to see him walk over dressed in full ethnic garb. Looking around our moto was the only thing in sight not ancient.

Hari was warm and open (which has been the case of every Croatian person we have met with no exception) and seemed as excited to meet us as we were to meet him. He took us to his studio telling us a bit about the history of Roč along the way. The town contains three churches from the 12th, 14th, and 15th centuries and is surrounded by Medieval walls, a Roman lapidarium, and has a cannon from the years it was apart of the Venetian empire. Hari told us a fantastic legend of a granny that saved the town from a Turkish invasion by filling the cannon with ash and setting it off making the invaders below believe there was an entire army firing down on them.

When we arrived in the studio, we began with a shot of local honey grappa, and an introduction to the materials. On the work table, there were a few tablets illustrating the different stages of surface preparation, as well as jars of pigments and brushes. It had been months since I painted and I was so anxious to get started! But, like everything, first comes preparation.

Hari walked us through the different stages and showed us our surfaces we would be painting on – ceiling terracotta tiles that were a few hundred years old. We applied a layer of gritty plaster made with river sand and water and set out to see the local church where we were given a tour of the frescoes while time worked its magic. 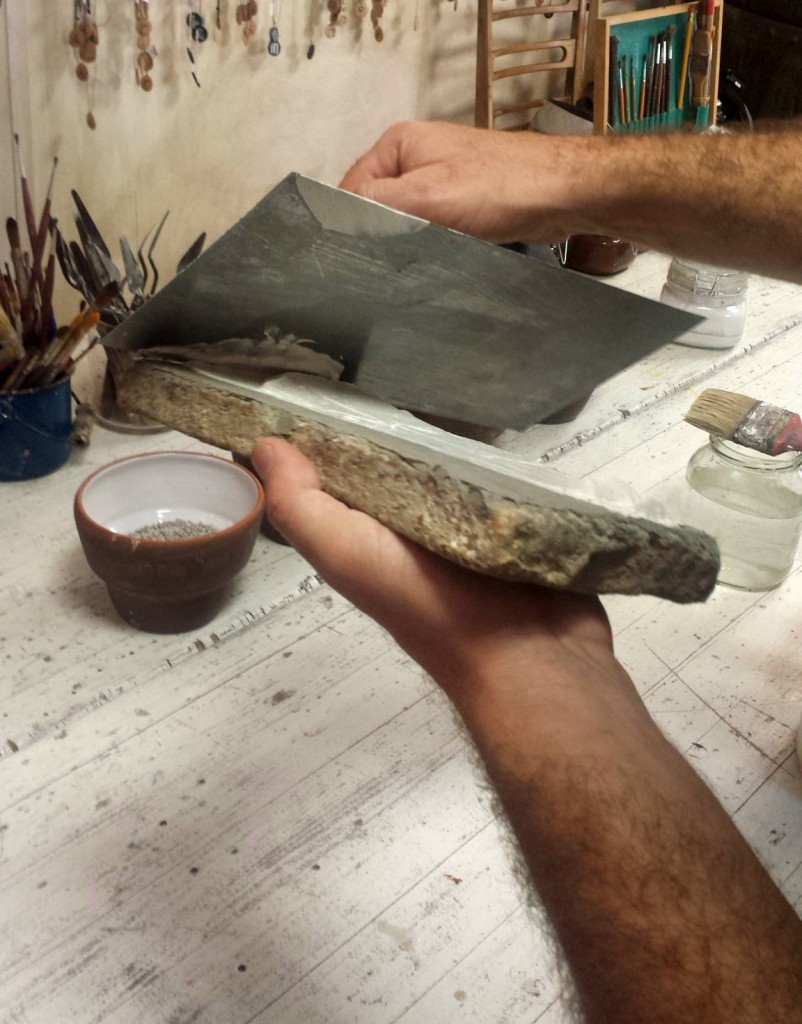 Hari applying a layer of plaster to the surface

When we returned, we applied another layer plaster, this time much silkier and with marble dust added. We had a few minutes while it settled and so we riffled through some images to find what would be our muse and created a template on tracing paper. We began mixing our paints and then placed our templates on top of the surface. Using a toothpick,  traced the template into the plaster. 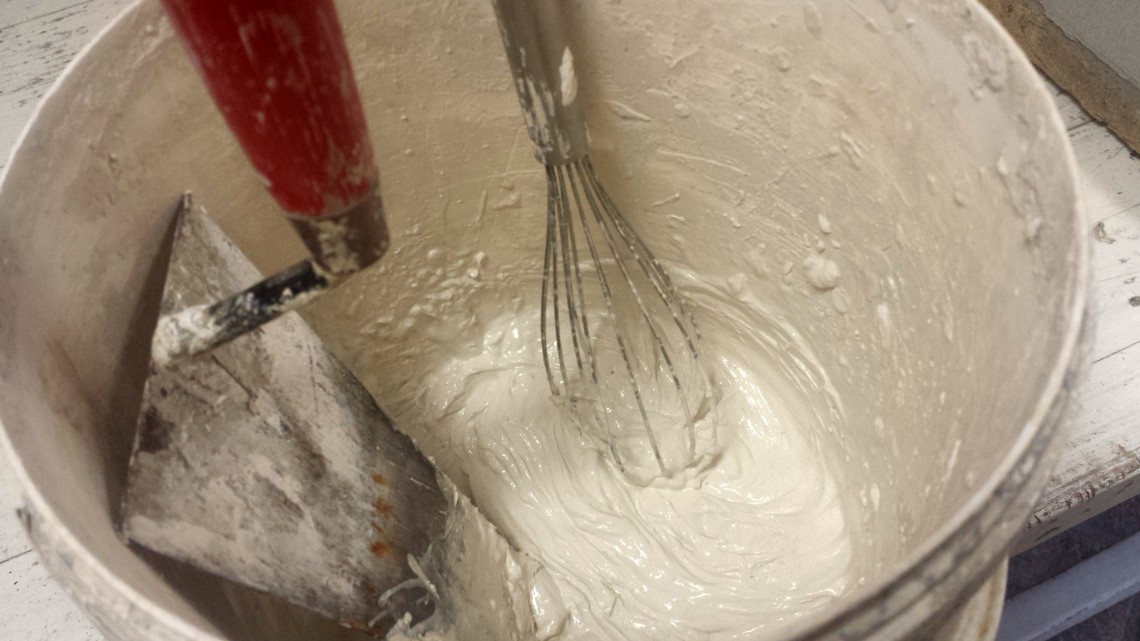 Plaster with limestone and marble dust

Working on the plaster surface was very much like working with watercolor. You start with the lightest colors and work up to the deeper and darker ones with layers. Some translucent, some opaque. After time you begin to feel the moisture dissipating from the surface. At this point, it is time to stop. If you are to go any further you must add a binder to the pigment as it will not absorb. 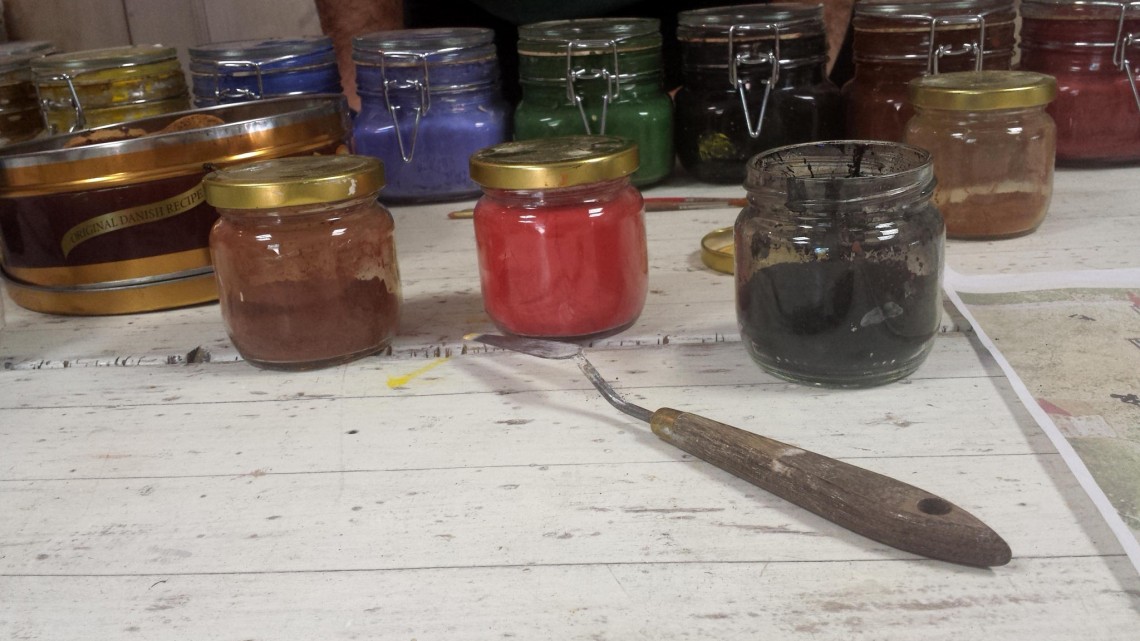 We enjoyed our time with Hari in his studio creating our works of art to take home. Having a hands-on understanding of fresco creation was enlightening. Apart from the painting, we also really enjoyed chatting with Hari. He speaks excellent English as well as Italian, and we had plenty in common with him besides art!

The workshop lasted around 3 hrs or so and cost about 600 or so kuna each (about $90) and was well worth it for the experience. Daryl as a non-artist had a great time, but 3 hours of prep and painting was his limit. I could of stayed an entire day working on my fresco. If you are unhappy with your artistic creation but want a fresco to take home, Hari also has some of his own beautiful frescoes available for purchase in the studio. If you are in the area and are interested in learning more about fresco workshops with Hari email him: hari.vidovic@gmail.com. 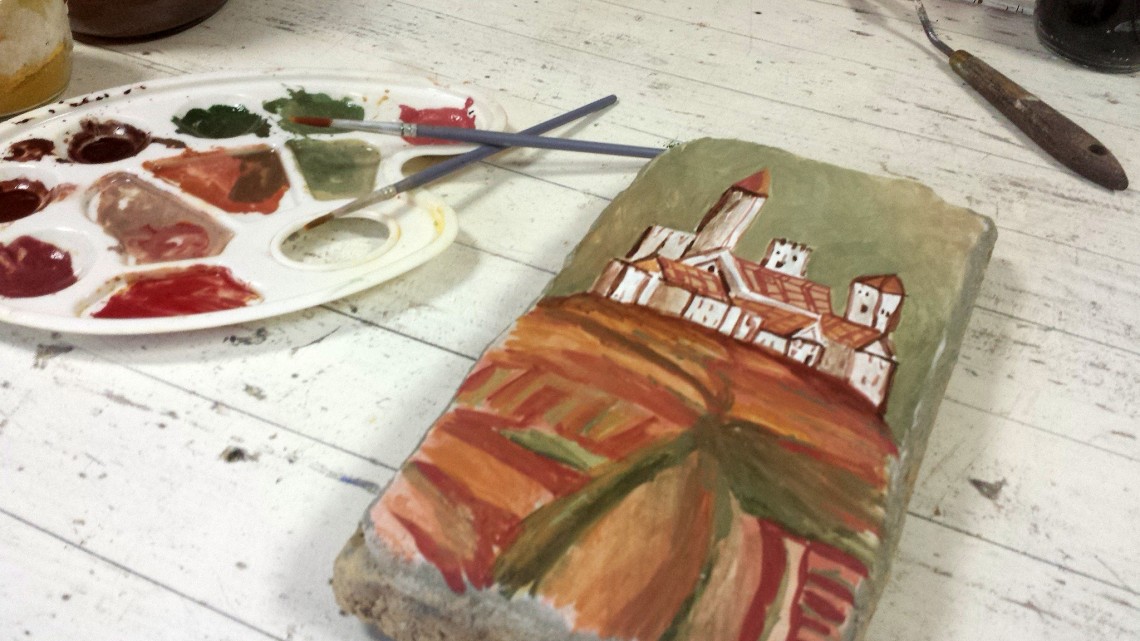 Fresco completed during the 3-hour workshop