You are here: Home / Europe / Croatia / Frescoes in Croatia: Dance of the Dead, Beram

As is the case with most frescoes in Croatia, the Chapel of Our Lady on the Rocks (Crkvica svete Marije na škriljinah, S. Maria delle Lastre) is not easy to visit. You must locate the key keeper to gain access. Sometimes, as in Draguć, the key keeper hands you the key and off you go. Other times, as in Beram (Vermo), you must locate the woman with the key, then she will hop in the car with you and direct you to the church.

The entrance is 20Kuna (about $2.85) per person. Some guidebooks say this is for the time spent by the woman to take you- she told me that this is not the case and all the money goes towards the upkeep of the church. The key keeper does not speak English, but does speak some Italian in addition to Croatian. Our Istrian friend Marijana offered to bring us since I didn’t think the woman would want to hop on the moto… 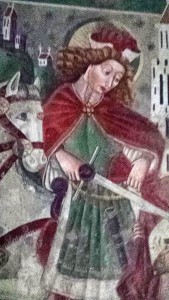 We went late in the day, around 6:30 PM. The small Gothic church is surrounded by pine trees and there is no electricity. The time of day proved to be a little too late to really view the Dance of the Dead fresco which is located on the west wall of the church, however even in the darkness, the red still vibrated. The rest of the church had enough light coming in to see fairly well. Photographing the walls was not quite successful (I will not use a flash to photograph art as it damages the pigment) and I apologize for the poor quality of the photos. There are two windows on either side of the main door, and there is a second door on the south wall, as well as two windows in the nave allowing light to enter.

The key keeper narrated all the frescoes for us and Marijana translated. We felt very fortunate to be able to communicate with her as we found the story of the church and its frescoes fascinating. She explained to us that during the 18th century the original church had been expanded, the Gothic vault ceiling had been covered by the Baroque tabulas that are seen in there now, two windows were added on either side of the door damaging the frescoes of Adam and Eve, and the Wheel of Fortune, and that also during this time, the frescoes were covered up with mortar and not rediscovered until early in the 20th century. 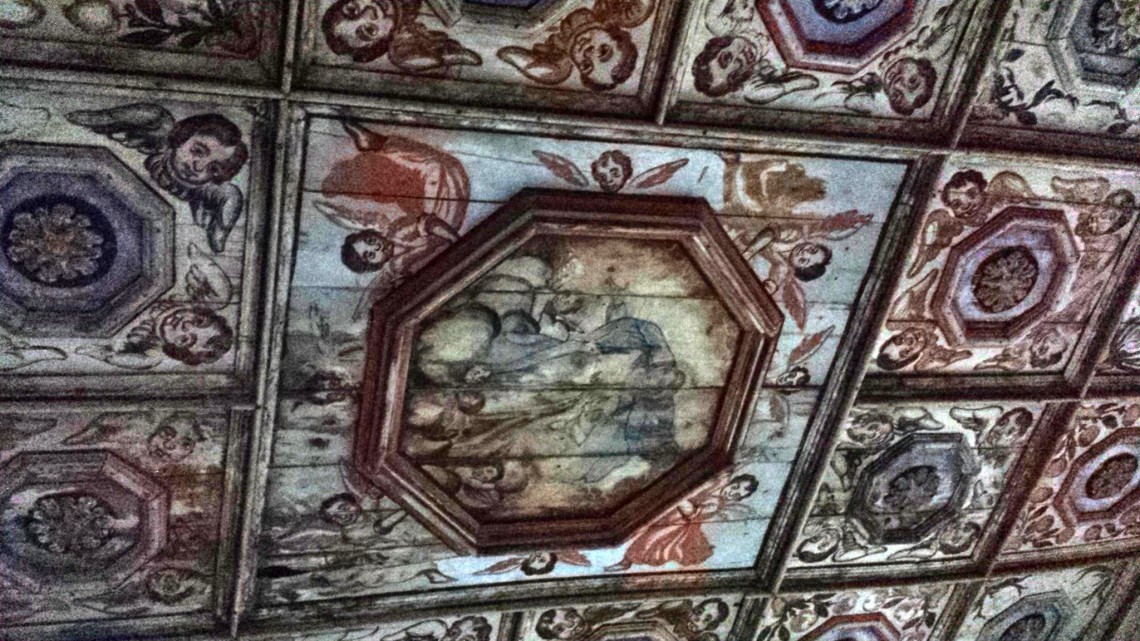 Detail of the Baroque ceiling 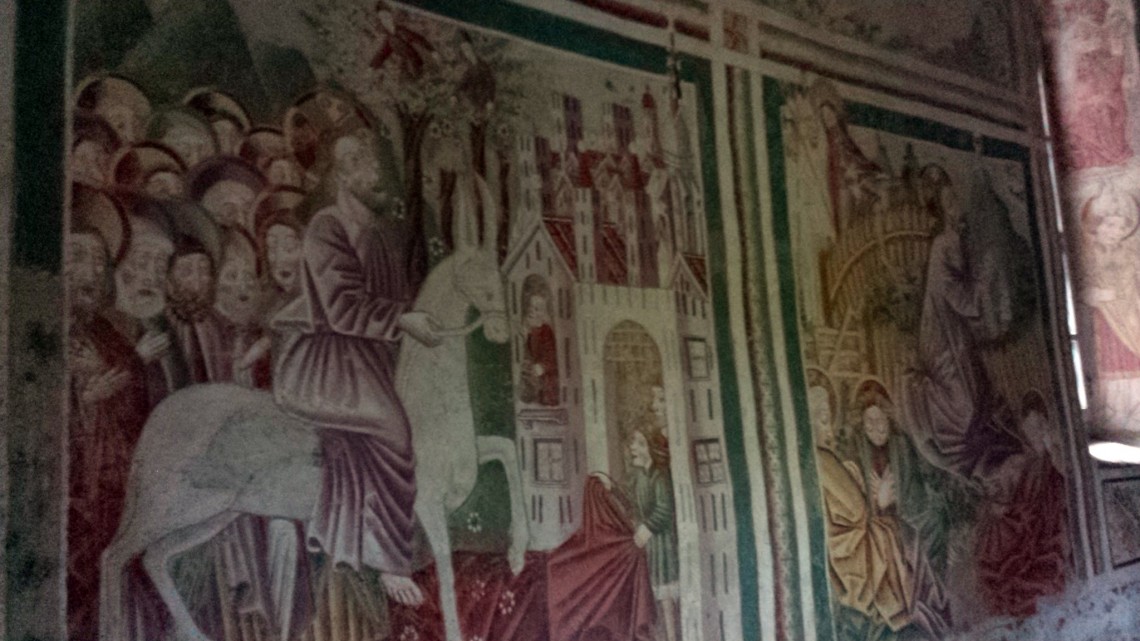 As described by guidebooks and websites the Dance of the Dead frescoes are beautiful. They were created to remind the faithful that everyone is equal in their dance with death; the pauper and the elite alike – all dance together when the time comes. They were vibrant enough for us to see much of the color and detail in the dark space. There was, however, plenty of light enabling us to view the rest of the frescoes. On the north wall is a rendition of the Adoration of the Kings running almost the entire length of the church. Through incredible detail, Kastav and his assistants pay homage to Istrian landscape and seascape by illustrating native flora and fauna, and the culture of the people painted in the traditional clothing of his time.

The south wall tells the story of the life of Mary in addition to other stories from the New Testament. For me, the most beautiful of the frescoes is a rendition of Veronica’s Veil in the underside of the arch over the entrance door. I was amazed at what great condition it is in.

I found the following website which I recommend checking out if you want to see more photos and descriptions of the frescoes, as well as history of the church itself. It also contains photos of the Dance of the Dead fresco which I was unable to photograph due to the lack of light. http://www.istrianet.org/istria/architecture/churches/beram/murals-descriptions.htm 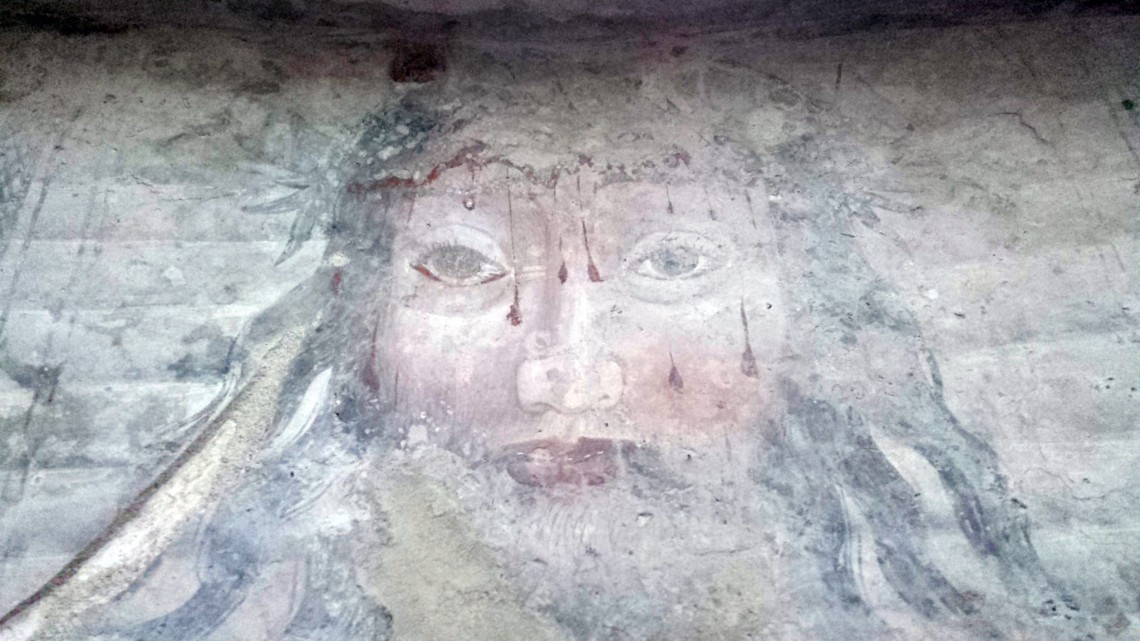