You are here: Home / Europe / Frescoes in Italy: Orvieto

Lavishly decorated and with no inch untouched, construction of the Duomo di Orvieto (Cathedral of Orvieto) began in 1290 and spanned several centuries. The cathedral is a bounty of artistic and architectural beauty that began in the Romanesque style and was completed in the Gothic style. The facade glistens in the sun and is balanced by 20th century bronze doors, a rose window, and bas-relief carvings. You enter through the main facade which gives you a true sense of scale. This space, like most of Italy’s cathedrals, was designed to make you feel humble and in awe. It does not disappoint on either front. 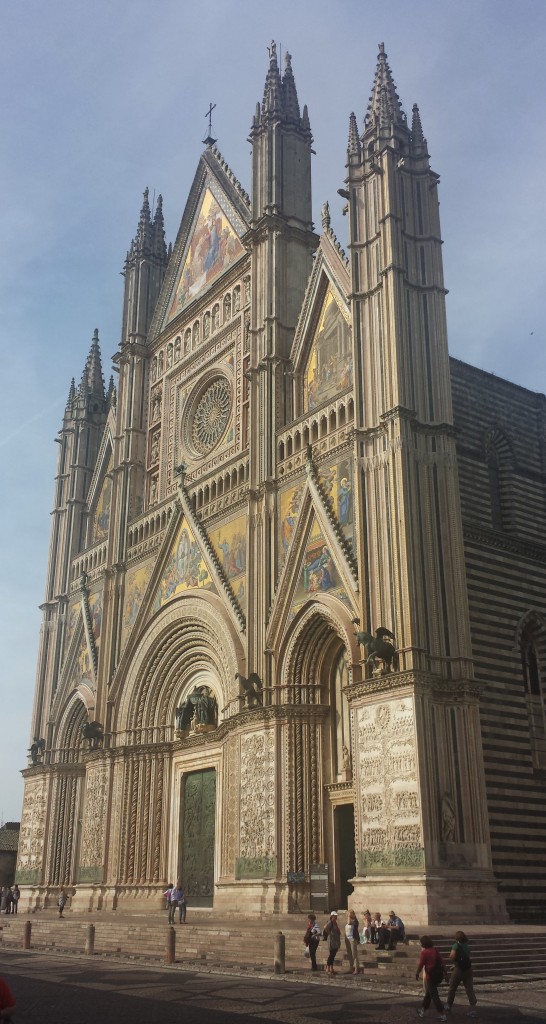 Facade of the Duomo of Orvieto dedicated to the Our Lady of the Assumption.

Once inside you can drop some Euro into a a machine that looks like an old payphone and view details of the cathedral along with commentary. When you get your fill of the digital era, you can walk right up and view the frescoes (I recommend saving your money and just doing this in the first place). Each chapel is covered with frescoes, all worth a look. The star of the visit for me though is the Cappella di San Brizio, also known as the Signorelli Chapel or the Cappella Nuova.

The chapel nave contains frescoes by Fra Angelico and Benozzo Gonzzoli. Shortly after production began, these two gentlemen were called to the Vatican by the Pope and the chapel frescoes went unfinished. Luca Signorelli was contracted approximately 50 years later to complete the task. He (and his studio) went on to create an intricate illustration of preaching, the Last Judgement, entry to Hell and more.

When I visit cathedrals I take notice of how the artists created the works to specifically relate to the lighting situations found in the surrounding space. Now these pieces are all artificially lit with spotlights, however I view the light coming in the space through the surrounding windows and understand how that light in particular (along with few candle offerings) was the only source of light highlighting the work for centuries. Artists at the time were aware of how to maximize the dramatic effect of their works by consciously designing the highlighted locations within in the frescoes to enable the natural light to make the most impact visually. The photo below shows the unfortunate spotlight located at the left lower side of the window and the strong afternoon light flooding in. 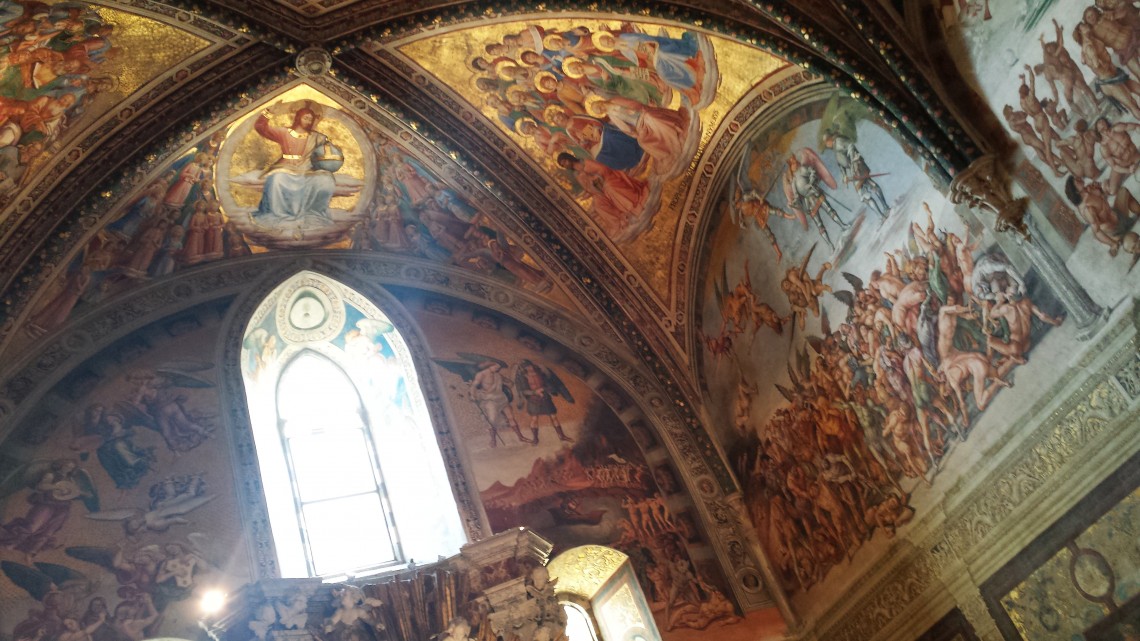 The Signorelli Chapel in the Orvieto Cathedral illustrating the spotlight as well as the natural light filling the space.

The lighting and shadow in the frescoes are addressed in relationship to the direction of the light flooding in the space from the window. This photo was taken in the afternoon. Take notice of the “line” of light haphazardly created by the spotlight. While I am grateful that lighting allows us to fully appreciate the works, there was a time when you had to drop a coin in a box to turn the light on in many cathedrals. This allowed you to view the frescoes both naturally and artificially.

The chapel has a time limit of 15 minutes for viewing with a set maximum number of people that can enter at a time. If you see a tour group inside just hold off for a few minutes and enter after they exit. In my experience the guards will allow you to look longer if you are visiting at off-peak times (first thing in the morning or after 3 pm). To really study all the frescoes inside the cathedral I would allow at least two hours. For a brief gaze a half hour to hour should suffice. For more information visit http://www.opsm.it/.