Istria is littered with outstanding frescoes. The trick is to be persistent enough to find the key. Draguć (or Draguccio in Italian) is a tiny town near the center of Istria, Croatia. There are two small Medieval churches containing frescoes in opposite directions on the outskirts of what remains of the fortified city. When you enter with your car there is a graveyard and small church,  St. Elisia (XIII c.), on your right side. You then come to an open area to park and a map of the village and its sights. Unfortunately, a few weeks prior to our visit the roof of St. Elisia fell in so we were unable to view the inside. Hopefully the damage was not to severe to the frescoes.

Finding the key to gain access to frescoes in Istria Croatia can be a challenge.

We were very fortunate to be wandering around with our new Croatian friend, Marijana, and her Bernese Mountain Dog, Misha. Marijana had wanted to take me to the newly opened House of Frescoes (which had an opening that she had read about, but when we arrived learned it is not actually opened to the public yet). She quickly started asking people she saw how to obtain the key to the church on the opposite side of town, St. Rok (aka St. Rocco, or St. Roch). We found out the key was being held at house #40 (always ask around as key responsibility shifts). She exchanged pleasantries, obtained a Medieval iron key the size of my face, and off we went!

Approaching the exterior of the church is nothing short of a fairy tale – the church is perched atop the hill with views of the valley all around. We arrived later in the day so the sun and daylight were low on the horizon. Putting the key in the door, adrenaline was rushing through my body and I could not get the key to catch! I had no idea what to expect. When the door finally opened I was amazed by the wonderful condition the frescoes were in. The door has a small window that is open to the elements with the exception of iron bars, and there is also a small open window on one side. 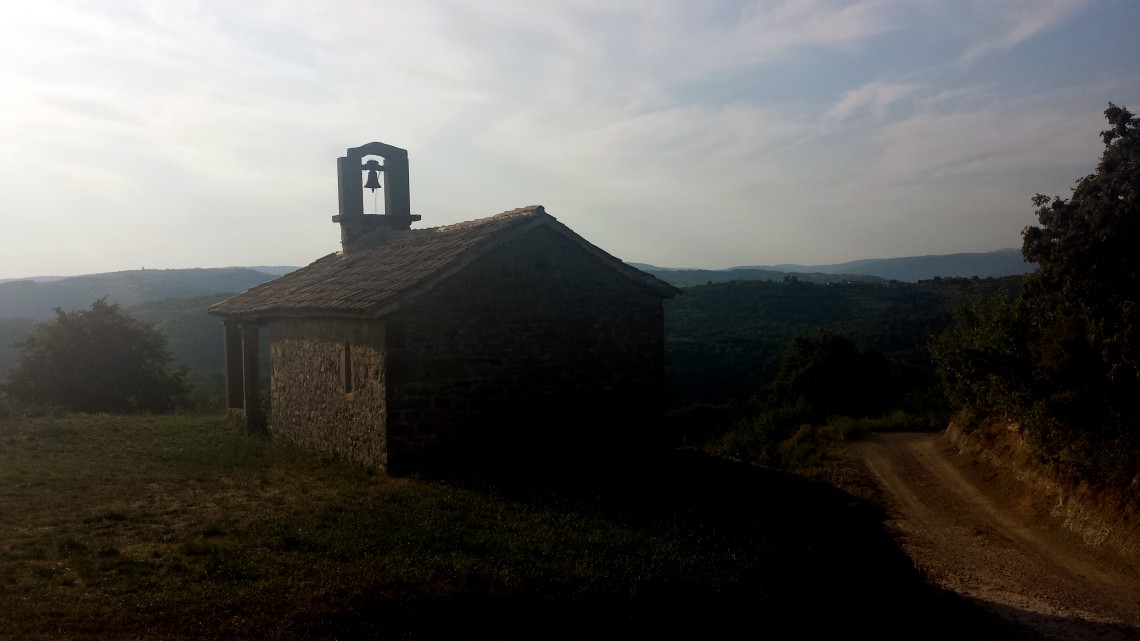 The Church of St. Rok located in Istria, Croatia

The frescoes inside created by Antonio da Padova are immaculate considering they date from early 16th century and exposed to the elements through this door and window.  A local fresco artist, Hari Vidović, which I had the pleasure to take a fresco workshop with, explained to me that St. Roch was the patron saint called upon to protect again the Plague. As such there are many churches dedicated to his honor throughout Istria, and Croatia as a whole. 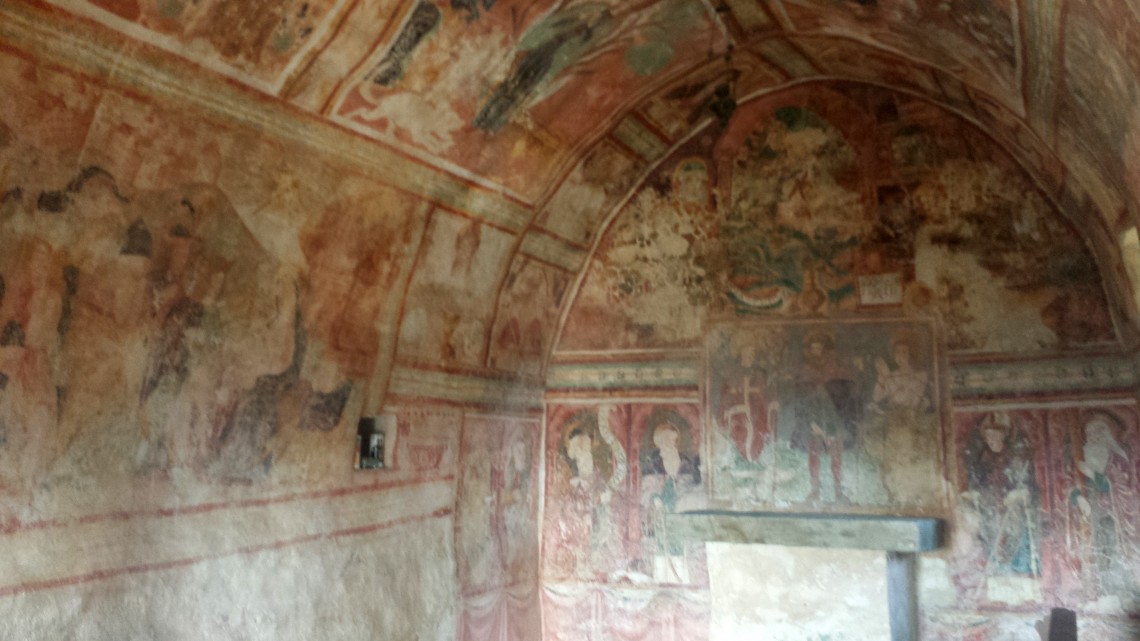 When we opened the door the light rushed in around us. As with any art I view, I will not take photo with a flash. I am not a photographer, so I apologize for the poor quality of photos. I hope you at least get an idea of what we saw from them. 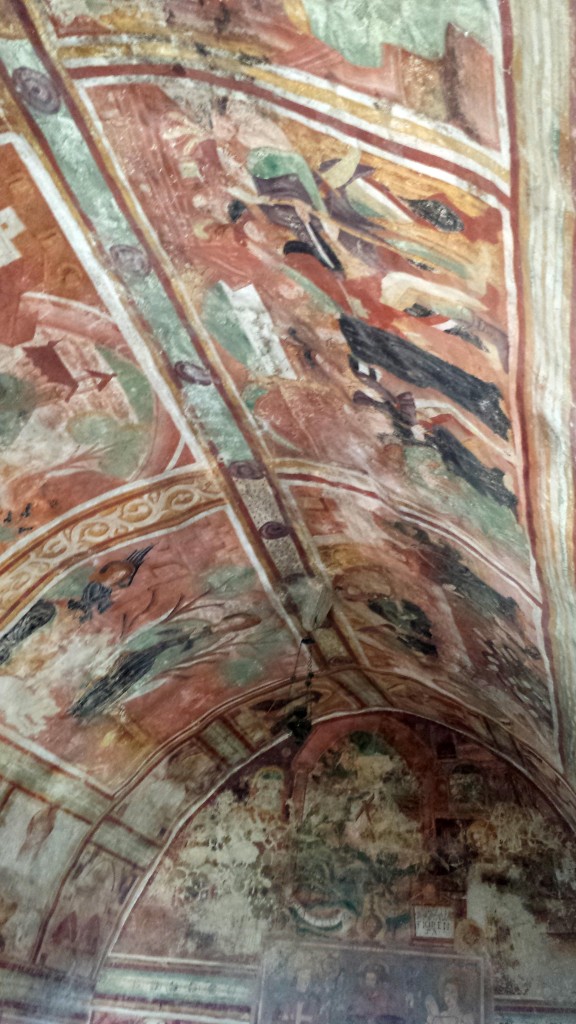 Never did I imagine that the sleepy village of Draguc would still be protecting such beautiful frescoes.

We were greeted with still vivid earth tones in an almost entirely covered interior. I am not exaggerating by saying my breath was taken away and I had tears in my eyes. There were locations where time and water damage have removed the surface but overall the condition was remarkable. There were also places at shoulder height where the frescoes have been covered in graffiti over time. I tend to find the graffiti exciting to look at and a raw illustration of time and place. 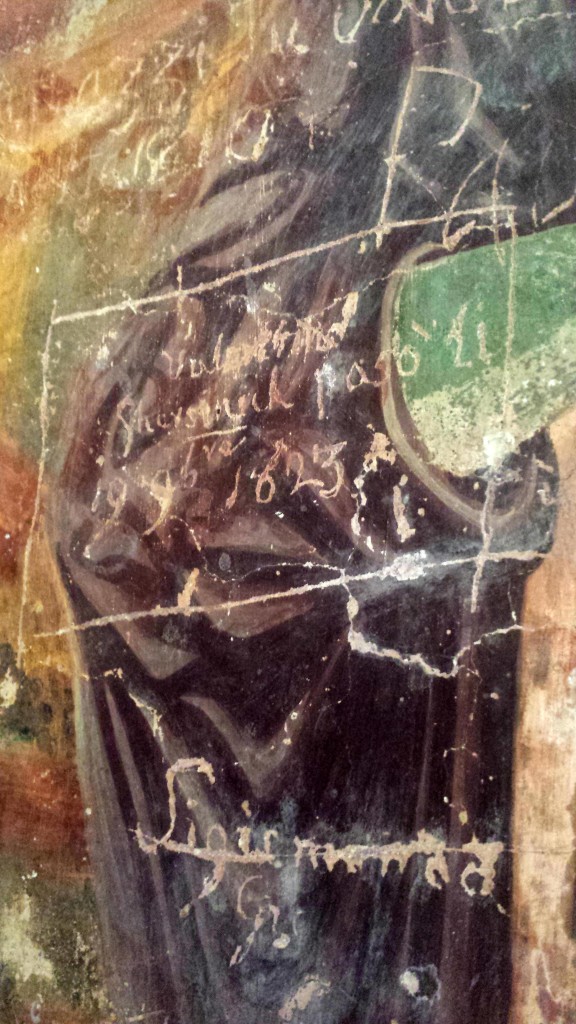 Graffiti from 1623 on fresco

Yes, looking at beautifully restored frescoes can be exhilarating. But in Croatia, seeing the time worn surface of the original hand, in a church that requires a hunt, is incredibly rewarding.

Close up of one of the frescos